The evening’s programme reflected dances popular at Linden including a number by Wellington devisers: New Year Jig by Maureen Robson, The Kissing Bridge by Romaine Butterfield, The Wind on the Heath by Iain Boyd and The Five Row Reel by Linden’s former tutor of 52 years, Ian Simmonds.

Ian devised The Five Row Reel for Peter Elmes who provided the music at Linden Club nights for several decades during the time Ian was tutor. Peter composed the tune for the dance which is named for the five rows of treble keys on his button accordion.

To commemorate Linden’s 60th anniversary, Ian devised a new dance; Linden’s Diamond, a 4×32 bar strathspey for four couples. After supper, a set of dancers demonstrated this dance before we all were invited to take the floor.

On this special occasion, it was fitting that Ian, Maureen and Lynne Hudson (a former tutor at Linden) were able to enjoy dancing Linden’s Diamond in the top set. Both Maureen and Lynne are past members of Johnsonville Club.

See more of Loralee Hyde’s photos of the evening here 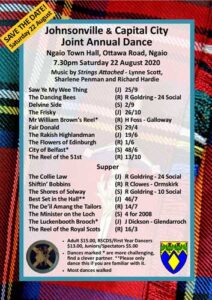