Jason Morris is one of the more recent musicians to transition into playing music for Scottish Country Dancing.

His first musical engagement for Johnsonville was at the 2019-2020 RSCDS Wellington Region Hogmanay celebration which Johnsonville organised. Jason played as a member of Aileen Logie’s band together with Iain Matcham, bringing us great music for a very special night of dancing.

This was Jason’s first Hogmanay as a dancer or musician, and he also kindly agreed to take on the duties of ‘First Foot’ on the night. Watch Pat Reesby’s video Piping in the First Foot

Jason has quickly become part of the Scottish Country Dancing musical scene, performing at club nights, dances, region classes and one summer school. Our recent July Live Music Night was the first time Aileen, Hilary and Jason had performed as a group.

See Jason’s story of his musical life below.

A musical trail of family history

As with many musicians, there’s a trail of family history – my Grandfather played piano and accordion in dance bands from the 1930s, and my parents met when he and Dad got talking about music at work. Mum was accomplished on the piano and has taught locally in the Hutt Valley.

I received a mustard-yellow ukulele for my 5th birthday, and proceeded to learn all the chords I could. The first sheet music I learnt was a Shirley Temple album, I still have a recording of me singing On the Good Ship Lollipop (cringe).

I was playing in the church music team from age seven on the ukulele, a great introduction to playing together as a group. I started piano lessons at age nine and learnt for many years from a Polish lady – initially we were warned that she was strict and used to rap students’ knuckles with a violin bow if they made mistakes. Nothing could be further from the truth, she was a big softy and ended up more like an extra Grandmother.

The yearly cycle of exams, and being ushered with great silence and reverence into the presence of a tweed-jacketed examiner from England was a great preparation for external exams at school – which seemed far less stressful by comparison.

At high school I was encouraged to take up another instrument so I chose Clarinet. School Orchestra was great fun and I liked to explore the music store cupboard. My first discovery was a vintage Alto Sax, probably from the 1940s. I got this working, and started using it in the orchestra.

After a year I bought my own Tenor sax and spent a lot of time arranging music for big-band type ensembles at school. The ukulele was ditched in favour of piano, synthesiser or saxophone in church music teams. Fortunately digital instruments have come a long way since the 1980s!

My final discovery in the school store, up on a high shelf, was a very dusty Tuba … only three buttons. How hard could it be? I collared a trumpet player one lunchtime and away I went – definitely the easiest instrument to play. When the music teacher arrived back from holiday he was suitably bemused now seeing me in the brass section. I played in the Hutt Municipal brass band for a couple of years and enjoyed playing at ANZAC parades, track races and band competitions.

On my first ANZAC parade, walking around central Eastbourne, the waist belt that takes the weight of the Tuba slipped off just before marching off. The section leader was quite strict so I dared not let the instrument slip. At the end of the march my outstretched arms were literally shaking in pain after carrying that lump around. If you’ve seen the movie Brassed Off, that’s a very accurate insight into Brass Band culture.

This year a neighbour asked me to play the last post for our lockdown ANZAC day at 6am: I can report that it doesn’t sound quite as majestic on Tuba, but my in-laws heard it a couple of kilometres away down the hill. I’m threatening to drag it along next time we play Trip to Bavaria.

It was during a 4th-form (year 10) music class I first heard a pipe organ – and was amazed at the ‘wall’ of sound it could produce. That first piece I heard is etched in my memory – Bach BWV578 Little Fugue in Gm.

In my early twenties, a ‘friend of a friend’ told me of a large reed organ that was available at very low cost, it was an 1888 two-manual instrument with a full concave pedal board. I lugged this from flat to flat over the years (hands up who wants to help Jason shift), and it was a great practice instrument for many years. I had a few organ lessons over a two year period, even with a decent piano background I can honestly say it was very challenging.

Much later I had the opportunity to purchase a real pipe organ, which I’ve progressively been rebuilding. I was able to allocate a nice spot for it half way up the stairs during our (ongoing) house building project. During lockdown I played it nearly every day, but Bach’s BWV578 still eludes me. It’s been a real privilege to play for many family funerals and weddings over the years (this is a mixed blessing, the black and white keys blur together with moist eyes!).

Although my Grandfather had accordions, as a child I only remember these being loud things that came out occasionally, usually accompanied fairly promptly with calls to put it away from the rest of the family. I was loaned an old Scandalli about 20 years ago by a friend, and when he retired back to Australia his wife insistedhe leave the accordion here in New Zealand.

I tinkered with it off and on, playing kids’ songs and accompanying carol singers. To honour my Grandfather’s legacy, when it came time to farewell my Grandmother, I borrowed a big black Titano accordion and led the hymns with that rather than organ.

I was introduced to Scottish Country Dancing when my eldest daughter started dancing at primary school with Ann Cole, then subsequently at the Lower Hutt club kids’ class. All four of my children have attended dancing there for varying lengths of time, but I stayed on after it became too cool for the kids. I kept my musical interests quiet for a very long time, but eventually got roped in to play piano for a wedding Ceilidh. After that there was no turning back.

My first ever club night gig was playing for Linden with Iain Matcham. Back in the early days just keeping up with which tune was next was a big challenge. 1-2-3-4-2-3-4-1 is a simple concept, but early on this provided much stress. During that first event I remember losing my place, and essentially stopped playing for a couple of bars. I glanced up from the keyboard and glimpsed the look of panic on Ann Oliver’s face; which spurred me back in to action.

It became second nature after a while, and I’ve enjoyed playing for club nights, annual dances, region classes and one summer school. Lynne Scott has been a continued support and provided coaching along the way, and actively encourages new musicians to join in.

As part of that, I’ve played piano regularly at Island Bay/Capital City Club, and have begun to try out (inflict) some accordion there also. Mastering the bass buttons has proved to be a much easier task than getting my rusty fingers to play fast melodies on a sideways keyboard I can’t see!

During the working week I am an electronics engineer, on weekends I am supposed to be finishing building the house when not distracted by music, dancing or tinkering underneath a long succession of French or Italian vehicles. 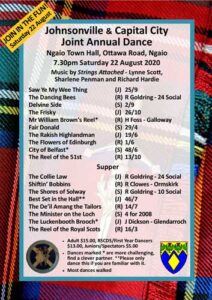