While in Germany, our tutor Rod Downey took advantage of the summer dance season to attend the Karlsruhe Ball on Saturday 9 June.

Music was provided by Joe Wheadon (Bass), Christine Moos (Fiddle) and Anselm Lingnau (Piano). Much as Wellington buildings don’t take winter cold into account, Karlsruhe is a place that believes it does not really get hot, with most buildings designed for winter. 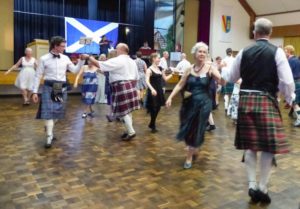 Despite that it was a great night. There were around nine sets who came from all over, i.e. within 2-3 hours drive (and that is a long way given the speed Germans drive on the autobahn). Quite a few young people (20’s) were at the ball, and it was a relatively complicated, highly vigorous programme with loads of Pas de Basque. We started at around 7.15 (late because of a car break down by Anselm), and finished around 11.40. A bit more expensive than we are used to in New Zealand at 40 Euros, not surprising since the supper was catered.

Every dance was walked once. Several dances were repeated, though I could have done without repeating an exceptionally vigorous 6-couple dance on top of a big supper mit Weisenbier (wheat beer)!

The first dance of the evening was Maureen Robson’s New Year Jig, and Iain Boyd’s Lords of the Wind was also on the programme. Iain Matcham’s dance, Autumn Tidings will be on the Spring Fling programme later in the year, so New Zealand dances and dance devisers are visible!

See more photos here One shows the band members, together with some of the Heidelberg dancers. You might recognise the name Anselm Lingnau – he is not only one of the musicians (on the right with a big smile), and tutor of the Frankfurt group, he was Convenor of the RSCDS 2017-2018 Membership Services Committee and prime mover in Strathspey Server, being awarded the RSCDS Scroll of Honour for this contribution.