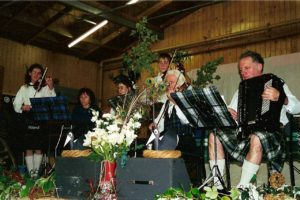 What a fun night, made more special when we danced Rod’s dance My Golden Bear, to the recommended music for the first time. Rod had Dovecote Park by James Braidwood in his head when he devised the dance in 2016.

Two weeks later, 26 of our members joined dancers from across the Wellington Region for the New Dancers’ Celebration. This time Roaring Jelly (Lynne Scott, Sharlene Penman and Richard Hardie) took their turn in bringing fine music to our dancing feet. Our 11 new dancers had a wonderful night, supported by 15 of our more experienced members. Thanks to Island Bay and Kelburn clubs for organising such a successful night.

At the start of November, we held our AGM and a belated Samhain Halloween themed night. There was no live music, but Rod carefully selected the atmospheric musical delights of Ferla Mor, the cheerful chirpiness of the music for Ellwyn’s Fairy Glen and the Harry Potter-esque Slytherin House amongst others. Witches’ hats, devil’s horns, spiders and ghostly grey all added to the atmosphere.

To finish the year, we had the pleasure of Peter Elmes’ company and music on two occasions. Many of us attended the Wellington Region’s Tribute to Peter Elmes dance on 24 November, thanking him for his musical contributions, and marking his retirement from playing for Scottish Country Dancing.

Then at our Final and Tartan Night on the following Monday, we were honoured to have Peter playing for us as the very last of his Scottish Country Dance musical engagements. And what a night it was, with seven sets on the floor dancing to rousing music by Peter, Aileen Logie, Don McKay and Hilary Ferral. 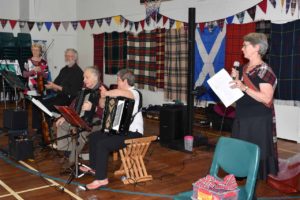 Peter has played a very special role in the musical history of Johnsonville Club (see Loralee Hyde’s photo history of Peter Elmes). From at least 1984, Peter Elmes “and His Band” (in early years) or “and Associates” (in later years) played for the club’s annual dances and tartan nights. Musicians John Smith, Merren Simmonds, and more recently Lynne Scott, then Don McKay, Aileen Logie and Hilary Ferral have lightened our hearts, and livened our feet with their music.

Thanks to everyone who joined us for this joyful celebration of Peter and his button accordion, his arrangements, and his generous encouragement of young musicians. And many thanks to Peter for all he has shared with us.