In 2018 Rod was awarded the Rutherford Medal for his “Pre-eminent revolutionary research into compatibility, including the development of the theory of parametrised complexity and the algorithmic study of randomness.” [1] The Rutherford Medal is the highest honour awarded by the Royal Society Te Apārangi.

Click here to see more about Rod’s award and a video of his Rutherford Lecture which he presented in Auckland, Palmerston North, Wellington, Dunedin and Christchurch. 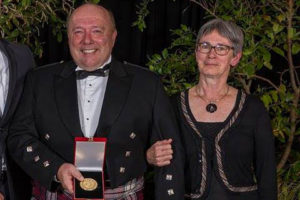 Rod and Kristin with the Rutherford Medal

Rod has a long and distinguished career in teaching and research in Mathematics and Computer Science and is currently Professor in the School of Mathematics and Statistics at Victoria University in Wellington.

Rod’s biography in his words

“My connection with Clan Donald comes from my wife. I have Scottish, English, and Irish ancestry (plus some South East Asian). My Scottish side comes from Guthrie and before that also Scrimgeour from Forfarshire/Angus and Glamis, and it seems one was born in Brechin in 1803. In the 16th Century it appears I have some kind of lord in the background. 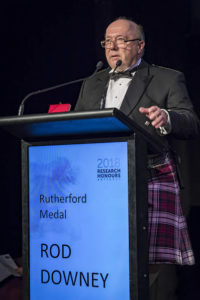 My forebear came to Townsville (“Scottish Lass”) as a teenager around 1890 or so. These are all lowland Scots, and hence have no Tartan. My wife got me into Scottish Country Dancing, and her father was a Macdonald. Thus Macdonald was a logical choice for a tartan.

We also called our boys “Macdonald Downey” (no hyphen as this cannot be continued for many generations). This chuffed my youngest son who looked up meanings: “Ruler of Men, owner of castles”.

Scottish Country Dancing is a great hobby. You learn a lot about the Scottish tradition of music and the history, with dances going back to the 18th Century, and lots of old tunes. Personally this also got me into Piobaireachd although pipes are rarely used.

I have devised around 100 new Scottish Country Dances and teach at the Johnsonville Club. I travel a lot, almost always for work to collaborate with co-authors around the world; Singapore, US, UK, Europe, etc. In December, I will be in Chile, then next year in Singapore and Kazakhstan. I was based for some time in Edinburgh. I have taught Scottish Country Dancing in many places in the world (even Tokyo), and also danced in lots of places.

Kristin and I arrived in Wellington in June 1986, via the US and Singapore in the years before. I have had a very satisfying career at Victoria University Wellington, which has a terrific logic group. I work in logic which has a surprisingly wide array of modern applications. We live in the most mathematical age in history, and yet this fact lies hidden mostly.”