Our tutor Rod Downey talks about Scottish Country Dancing classes and schools and the experiences he and Kristin have had.

How we began dancing

Kristin began dancing in Singapore in the early 1980s when I had my first ‘real job’ lecturing at the National University of Singapore and Kristin was an expat wife. She went back to dancing in 1991 after both our children were born here in Wellington, joining the beginners’ class at Johnsonville Club.

At the same time I went back to playing volleyball, immediately sprained my ankle (yet again) and quit. Then on Easter Monday 1991, with no club night running at Johnsonville, Kristin dragged me along to dancing at Linden Club saying ‘you might like this’.

With the help of baby-sitters in those early years, Kristin and I started regular dancing with the Johnsonville Club and never looked back. To learn faster we also each danced individually at a second club.

How we learnt more

Early in 1991, we both went to the beginners’ class run by Ian Simmonds, tutor at Linden Club. This was a typical beginners’ class with a group of new dancers (maybe a set or so) all of more of less the same standard.

Ian worked on the basic steps and formations in a very concentrated way. I distinctly remember him working on Pas de Basque, emphasising the use of the knee and the flexing of the ankles to gain rhythm. I remember mine was all wrong at the time.

Having the opportunity to work on this in a concentrated session was invaluable. When else do you get time to work in a small group on your steps and basic formations? If you are new dancer and see the chance to go to a Region Class then go: they are really helpful.

We went to a nice class with Damon Collin during the 1992 Easter Weekend School in Wellington. This was a weekend school run by the region, for three days of a long weekend.

From memory, the classes were divided into the usual levels, new, intermediate, advanced and maybe advanced technique. Of course, now there tend to be other categories, like advanced social, low impact, high impact etc.

With my usual impatience, I had wanted to go into the Advanced Class, but Marjorie, my then tutor told us to go to Intermediate. Good idea, we learnt a lot.

Every teacher teaches you something, if you look for their ideas. I am always surprised when I hear people say that they ‘got nothing’ from a class. Be keenly observant, and questioning of your dancing.

Even more helpfully for Kristin and I, Damon’s Intermediate class was also small, maybe two sets, whereas the advanced was typically large with many sets, and hence individual dancers had little concentrated attention from the tutor.

Damon gave everyone lots of individual attention accordingly (something not recommended by the Society, but I find really helps for me). If you want this at a class you should talk to the class tutor who I bet will be overjoyed to help. (But don’t take any comments which you perceive as negative to heart, as they are trying to help).

There were the usual after parties at the school late at night, but we had small children and the only parties for us at the time involved fish sticks or chicken nuggets. We did go to the final Ball, which was themed around the 18th Century, and had dances from that period.

Damon chose what has become one of my favourite dances, Down on Yon Bank, as our key dance to learn. He wanted us to be perfect for the ball.

This was an excellent teaching choice by Damon as it is quite tricky with a lot of phrasing points, so it taught us a lot as intermediates. It was a challenge for many at the ball, but not for our class! It definitely made us feel momentarily superior, at least until the next dance which we likely stuffed up.

Our first summer school was in 1993 in Wanganui and we were in the advanced technique class run by Mary Stoker, a friend of Miss Milligan (the co-founder of the RSCDS). She was very much the old school style of teacher.

Many people think that an advanced technique class will be a class with lots of really complicated dances, kind of like the last dance we do at Johnsonville Monday nights on steroids. This is occasionally true but more often it is not the case.

For RSCDS schools like ‘the’ Summer School (at St. Andrews), NZ Summer School, TAC Summer School (Canada), where teachers are expected to mainly use Society dances. In this case a technique class is either mostly basic dances, or even basic formations, done perfectly, or you do some of the non-flowing dances from the RSCDS books we don’t do (and usually there is a good reason for that).

Wanganui Summer School had the usual format of classes in the morning, activities like other dance forms, music, sleep(!) or a G &T in the afternoon, and some kind of social dance or ceilidh each evening; including two major social and more formal dances: Hogmanay and the President’s Ball. Then after the night’s dancing, informal parties, which Kristin and I did not go to because of young children.

In our technique class we would warm up in a circle, have some step practice, and then do lots and lots of basic formations. One day we did 4 hands across and 4 hands round, and especially 4 bar turns for about an hour. Mary drilled and drilled us. My 4 bar phrasing was never the same again.

Thinking back, I recall dancing The Braes of Breadalbane (video here) and The Frisky (video here), which are typically thought of as ‘beginners’ dances’.

We did do some of the less commonly done formations, like the tournee. I have done the tournee in many, many of the advanced technique classes I have been to! That and the Strathspey all round poussette.

For this reason, and since I had begun writing dances, I wrote one for our teacher Mary Stoker called A Mary Summer which was the second dance to feature my Rose Progression. This would be a good technique teaching dance with both tournees and roses!

I also learned how to set to and turn corners at Mary’s class; she was very big on moving forward for the turn. These simple lessons have stayed with me ever since and I use her ideas in my own classes.

As learners, one thing to always be is observant. What is the tutor saying? How do they view a formation different from my own view? Can I incorporate this in my own dancing? Mary was also quite big on foot changes, but I have not used her method.

The other advanced (technique) class approach is to do lots of un-flowing dances, possibly not copied down correctly from the 19th century fan or the like. The Society had access to lots of old material, but the reconstructions of the actual dances is difficult.

Compare the current instructions for the dance The Colonel (video here) with the original manuscript for The Collonel below and you can see how the dance was adapted.

What you need for such non-flowing dances is good technique and the ability to modify your dancing to adapt to strange phrasing. Memorable such dances include oft done ones like The Maid of the Mill (video here) where the transitions are really quite difficult, and you need real scope (attack) with the steps, similarly The Carl Cam’ Ower the Croft.

Another example is The Falkland Beauty, where bars 1-8 are diabolical. Maybe it was originally a 32 bar dance reconstructed wrongly; we don’t really know how they danced 300 years ago. Notice in all of these dances, the emphasis is not on the complexity but on the transitions.

One such class I did was at a TAC summer school. TAC (Teachers Association of Canada) is a really fun school to go to in Canada, lots of lovely people, really well thought out social programmes catering to all levels of dancer, with lots of walk throughs. I recommend it very highly if you want to try a school for an overseas holiday.

I have been to TAC several times and at one school the tutor was Marjorie McLaughlin from San Diego. She decided to dance all the dances from Book 8. One of these dances The Braes of Atholl has very tricky reels in it which are very difficult to phrase. Half the sets in the room fell apart, and it was abandoned!

Sometimes you’ll do very complex dances, but rarely. At one Easter school in Wellington tutor Morag Napier of Sydney tried the Hugh Foss fugue Wing the Wind with ‘modest’ success (but somewhat better than in this video).

This is how you get flow in your dancing. Advanced dancing to me is not defined by what formations you ‘know’, but your ability to modify your own dancing to enable the dancing of others. When this is done right, and it is done in phrase with the music, I think you get the true joy and beauty of Scottish Country Dancing.

The key to Scottish Country Dancing is not so much pointing toes etc, but being in the right place at the right time, not rushing, and being calm. You must count, count, count and really listen to the music.

I like teaching all kinds of classes and different classes suit different groups. Why do we dance? There are many reasons: loving the music, feeling the rhythm, dancing as an expression of that symbiosis, seeing the patterns.

The social aspect is important too, being with a nice group of people like those at Johnsonville. Being with your partner. Even more importantly being in phrase with your set; it is a team sport. 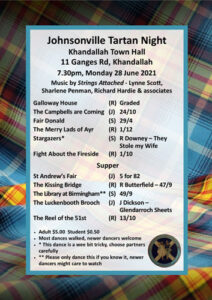 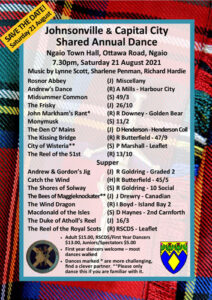