Johnsonville Club Secretary Robert Vale attended the 2021 Easter School, organised by Quentin Currall and the Lawrence Scottish Country Dance Group in the goldfields town of Lawrence down in South Otago.

See what Robert has to say about the delights of dancing in South Otago below.

The School kicked off on Good Friday evening with an enjoyable social dance in nearby Waitahuna.

Classes began the next morning, from 9:00 to 12:00, with two to choose from, Development or Further Development. I chose the latter, which was taught by our own Jeanette Watson.

Free time after classes was a chance to enjoy the local delicacy of a South Island cheese roll before the evening’s Formal Dance in the very grand Coronation Hall in Milton, on SH1 about half an hour from Lawrence. All the dances were walked so it was less scary than it might have been.

On Easter Sunday there was time to explore the delights of Lawrence in the wonderful warm weather, before classes in the afternoon, followed by a dinner and Ceilidh in Beaumont, where we were advised to avoid flushing the loos in the hall so as not to overload the septic tank – ah, rural life.

Finally Monday morning featured a Combined Class for the whole group back in the big hall in Milton before we all set off on our travels. I came away both having had a really good time and feeling I had learned a lot.

Watch a video of the fun, friendship and fitness at Easter School from the Lawrence Scottish Country Dance Group
See an Otago Daily Times article and video on how the School exceeded expectations. 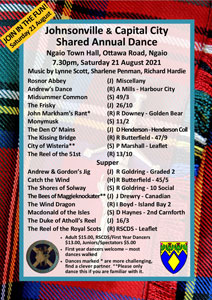