Even though things are pretty much back to normal as far as holding events is concerned, we can’t take anything for granted these days.

So it was really satisfying to have our second Tartan Night for the year go ahead as planned, on the original date of 27 June, with all band members present and correct, the MC on deck, and most members able to attend.

It was a lovely, lively night of dancing, as Lynne Scott, Sharlene Penman and Richard Hardie filled the hall with irresistible music, and five sets of members and visitors took to the dance floor with vigour. Commiserations to those who were unable to make it.

Khandallah Town Hall looked very festive, thanks to the efforts of all those who turned up early, and made the most of the 20 minutes available for set-up. Ladders were out, tall (and short) people were deployed to add colour to our night with tartan posters, rugs and bunting, and Scottish flags and banners.

After some initial confusion (!), we started with Lonely Sunday by Damon Collin (not by wife and fellow deviser Gaye, as had mistakenly gone out on the programme). Then we were off and reeling with Lady C Bruce’s Reel, wove our way through The Lover’s Knot (videoed by Pat Reesby), on to Mrs MacLeod and To Catch a Weasel, finishing the first half with The Reel of the Royal Scots.

Supper was a magnificent spread with options for everybody, and those of us who are gluten-free were delighted to find that our corner of the table had lots to choose from. There were also three boxes of pizza sending out tempting aromas – a first on our Tartan Night supper tables.

The second half of the night included popular dances St Andrew’s Fair, The Kissing Bridge, and The Luckenbooth Brooch, finishing with perennial favourite The Reel of the 51st.

Thanks to everyone who helped make the night so enjoyable – Rod as MC, our band Strings Attached, the hall set-up team, the supper team with Elizabeth Ngan co-ordinating, and all those who stayed on at the end to pack up. And of course all those who added to the atmosphere by turning out in a touch of tartan.

A special feature of the night was the public premiere of tutor Rod Downey’s new dance Tairāwhiti Wedding. This original version was trialled by Leeds Branch tutor Catherine Livsey and her experienced class (video here), and taught at club and at the Wellington Region Tuesday advanced class, but this was its first public airing.

The dance was devised to commemorate the Gisborne wedding of Rod and Kristin’s younger son Alex to Lana Phillips, at Waitangi weekend this year. Tairāwhiti is the Māori name for the Gisborne region, which turned on perfect weather for visitors and family, creating some wonderful memories.

NOTE: Rod has since changed the instructions for Tairāwhiti Wedding to create better flow. The revised instructions are available here or on Rod’s home page, where the digital version of his most recent book of dances The Pīwakawaka Collection is under construction. 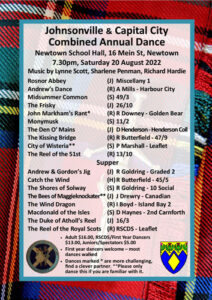