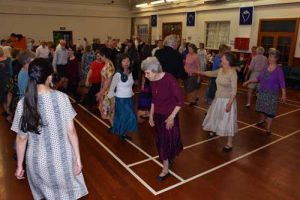 A good number of Johnsonville dancers joined Tawa Club at a special dance on 7 December at Ngaio Town Hall to pay tribute to Maureen Robson who is retiring after teaching the Club for 38 years.

The eight sets on the floor, together with other friends and former dancers as spectators, enjoyed a programme of dances specially chosen by Maureen.

Some were dances she had devised, others were of special significance and one, The King of Spain’s Daughter, was devised for her by local devisor Iain Boyd. 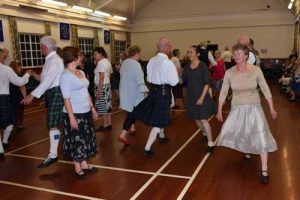 One of the dances of significance was Busy B, devised by Maureen for her granddaughter Brianna who was busy training to be a nurse.

Melva and Désirée Patterson gave speeches of thanks to Maureen for her dedication to Tawa Club along with anecdotes of her dancing life. One outstanding feature was Maureen’s commitment to ‘theme nights’ at the Club, both for arranging programmes of relevant dances that were appropriate to the themes and for her marvellous costumes.

John Patterson copied photos Maureen had taken over her years of tenure at the Club. Désirée created posters of the photos which were displayed on the walls of the hall. John also developed a visual photo show which dancers could watch between dances. 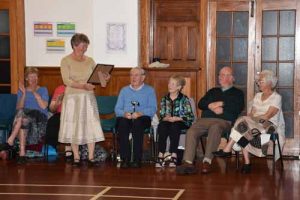 Maureen with her Tribute from the Wellington Region. Barbara Kent, a former Johnsonville Tutor, is sitting next to Allan Robson.

Ann Oliver, RSCDS Wellington Region President, presented Maureen with a framed Tribute in appreciation of her support, commitment and dedication to all dancers, tutors and musicians of the Region.

Maureen and husband Allan are originally from Northumberland in England.

A highlight of the evening was A medley of tunes from North-East England … with some ‘different’ lyrics – by musicians and singers from Tawa Club.

The ‘different’ words to songs well-known in the North-East of England were written by Moggie Grayson, who both sings and plays guitar. 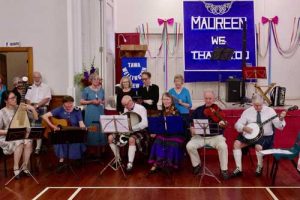 One spectator particularly welcomed by Johnsonville dancers was Barbara Kent, a former tutor of Johnsonville Club.

Maureen and Allan were also Johnsonville Club members in years gone by, also tutoring and serving on the committee, so we too have benefited from their service to Scottish Country Dancing. See more about Maureen’s contribution to dancing

Thank you to Tawa Club for arranging such as special and happy evening as a tribute to Maureen’s contributions to Scottish Country Dancing.

See Pat Reesby’s videos of the evening below.