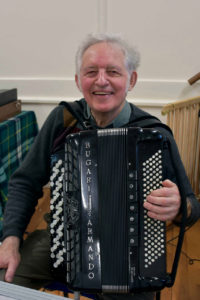 In November 2018, we recognised the massive contribution Peter Elmes has made to Scottish Country Dancing through his music. He has now retired from playing his beloved button accordion.

The Wellington Region had a tribute dance for Peter on 24 November with dances that were devised for him and others for which he had composed the tunes.

On Monday 26 November we farewelled him at Johnsonville Scottish Country Dance Club at our final night for the season.

My favourite sets of music Peter has arranged are for Cadgers in the Canongate (“48 bars of ecstasy” as described by Philippa!), The Braes of Breadalbane and Down On Yon Bank. My favourite tune is The Marquis of Huntley’s Strathspey.

As usual with being a photographer, I’ve taken many photos of Peter and his band over the years. Click here for some of my personal memories of the joy and delight Peter has brought to many, many nights of dancing.